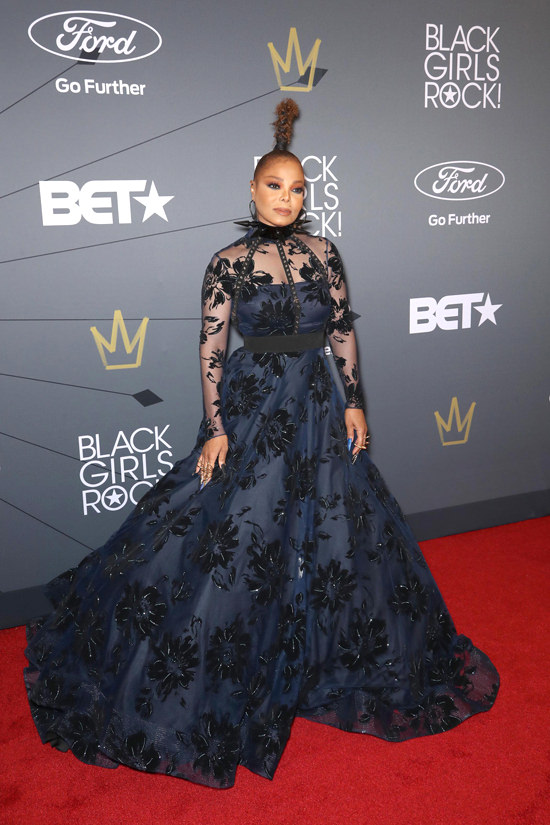 On Monday, Queen Janet walks down the Black Girl Rock’s red carpet, all dressed up in her majestic Christian Siriano pageant gown. Janet-style which has been forever popular with the crowns, nails, and the magnetic look, fired up the event as she always did! Her fierce head-turning nightgown put her back in the spotlight, taking over the ceremony as an ever-to-be-super star. The 52-year-old musical icon showed off her unique style as she draped herself in a sheer floral gown, embellished with radiant adornments. The elegant look boasted a sheer design with a black floral pattern throughout, and billowing out into a long and dramatic train. The voluminous long-sleeved nightgown accentuated her narrow midriff with a band detail wrapped around her waist. Edging up her look, she sported a spike collar around her neck, dazzling the silhouette. “The Black Girls Rock Awards ‘honors the groundbreaking achievements of Black women who have fearlessly broken barriers in the areas of art, business, entertainment and community service”. Janet received the Rock Star Award, which celebrates fierce, fearless ‘heroes’ in music who have successfully pushed the envelope and carved a niche where other artists not only take note, but dutifully follow her lead.